Developed during the Korean War of the early 1950’s, Mickey Mouse boots have become a vital part of the military’s extreme cold weather clothing system and a popular footwear option in the military surplus world. These thermal boots replaced the shoepacs of WWII and were first issued to the Marine Corps and then the Army to combat the cold and wet weather conditions in Korea. Cutaway view of Type I Mickey Mouse BootsMade of two layers of seamless rubber with wool insulation between, Mickey Mouse boots prevent heat from escaping the boot while also preventing cold air and moisture from penetrating the exterior rubber layer. One of the most significant aspects of the Mickey Mouse boot is its ability to be effective in weather conditions down to -20 degrees Fahrenheit, even in cold and wet climates. While shoepacs had been effective in cold weather conditions during WWII, their leather and rubber design was not enough to prevent frostbite and other cold ailments Marines faced in Korea. They were also difficult to keep dry and required the constant changing of socks, which was a laborious task to do in cold conditions. 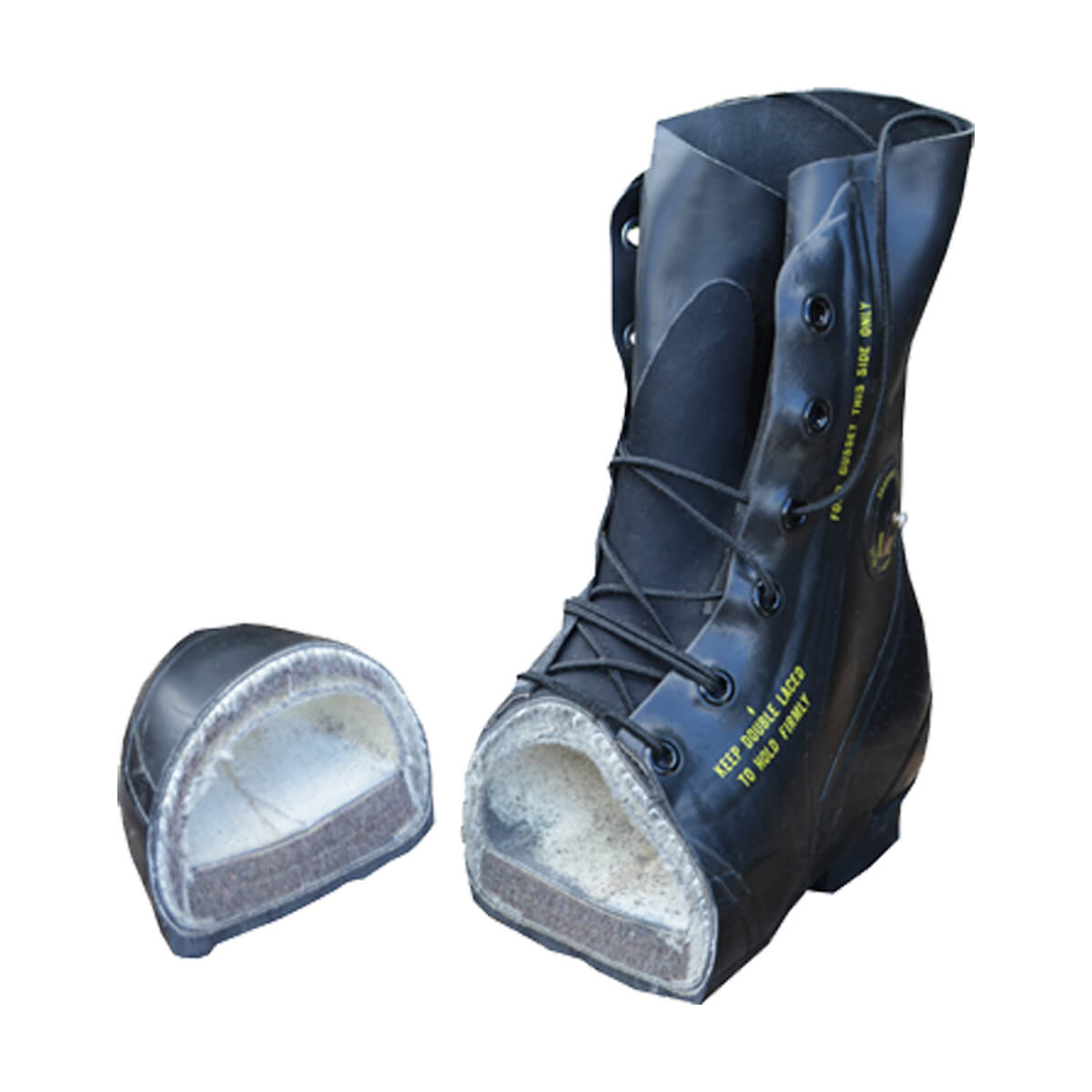 Evolution of the Mickey Mouse Boot

Since their development in the 1950s, the boots have undergone some changes and revisions in their design to accommodate different conditions and scenarios. One of the biggest adaptations to the original design was the inclusion of an air valve in the 1960s. By opening this valve, soldiers could prevent their boots from rupturing in unpressurized aircraft or high altitudes. Another development from the original design was a thicker, heavier version of the boot meant for freezing weather protection in weather below -20 degrees. Aside from weather rating and weight, the other biggest difference between the two versions of the boot is their coloring - the first version features black, oil-resistant rubber and the second version is made of white rubber. The boots have expanded from military boots to extreme cold winter work boots worn by civilians.

The right pair of boots is essential when you are preparing to brave the freezing weather. If you are looking for the best pair of extreme cold winter work boots, keep reading!

What is the Warmest winter Boot You Can Buy?

When someone is faced with experiencing the coldest weather possible, a question they may have is “What is the warmest boot in the world?” It is a commonly known fact among military gear enthusiasts that Mickey Mouse boots are the warmest pair of winter boots you can buy!

What are Mickey Mouse Boots?

"Mickey Mouse Boots" is the nickname for the U.S. Army Cold Vapor Barrier Boots. These boots were designed for use for temperatures from 20 to below zero and are a part of the Extreme Cold Weather Clothing System. The boots were originally designed and adopted around the Korean War. They offer a unique solution to water evaporation from the feet, which is the leading cause of frostbite and cold injury in winter.

Why Are They Called Mickey Mouse Boots?

Cutaway view of white Bunny Boots While they are not officially called “Mickey Mouse” boots by the military, these boots became known by the moniker for the way their appearance resembled that of the famous Disney character. The white version of these thermal boots became widely known as “Bunny Boots” although there are conflicting stories about whether this is because their coloring resembles a snowshoe hare or because wearing them makes the foot look large like Bugs Bunny. In their official specification, both boots fall under MIL-B-41816 with the black boots labeled as Type I and the white boots labeled as Type II under the same specification. Both Mickey Mouse boots and Bunny Boots have become a popular military surplus item for hiking, hunting and other recreational activities because of how effective they are in keeping the foot warm and dry in cold, wet conditions. They are also fantastic boots for snowshoeing due to their rubber wedges on the heel and toe of the boots meant to lock in military snowshoes and ski bindings.

What is the Opinion on Mickey Mouse Boots?

In a Mickey Mouse boots review, one hunter commented that they wore the boots for a full winter and never had cold or wet feet. In another Mickey Mouse boots review a motorcyclist also commented that they were the perfect extreme cold winter work boots. Their toes never got cold; they never had a problem with sweating feet while wearing the boots.

Change socks daily - Due to the dual layer of insulation and moisture's inability to escape the inner shell of the boot, sweat can present a threat to comfort. It is recommended that wool socks are worn with these boots and changed at least daily.

Do not play with the air valve - If your Mickey Mouse boots have the air valve, do not open this valve unless airborne and do not blow into this valve. Getting any type of moisture in the insulation layer can cause it to be ineffective in keeping your feet warm and dry.

What are the Best Survival Gear Items You Need? August 26, 2021
Latest